In 1992 IBM Set To Work On The World’s First Smartphone, The Simon Personal Communicator

Previous Next
In 1992 IBM Set To Work On The World’s First Smartphone, The Simon Personal Communicator

Contrary to belief and subject to which decade you were born in, the iPhone 2G from 2007 was far from being the first smartphone and in fact subject to which country you lived in not only did the likes of Nokia, Samsung, Motorola and Sony in 2000 to 2002 already have 2G mobile internet smartphones with colour touch screens, cameras, internet… and app stores they also had 3G smartphone devices 4 years before Apple.

But before mobile internet even became a thing, 2G which rolled out in Finland back in 1991 and took a few years to make its way across the globe, had to undergo a number of changes as did the mobile device technology in order to provide the means and resources to transfer so much data, 2G initially only brought with it better connectivity combining Radio and now Digital frequencies, marginally better encryption, though it was only better encrypted between the phone and network provider and still left the door open to tapping, and provided a means to text messaging, and of course the later ability to transfer internet data at incredible speeds of up to 40 kbits per second! YES, it was a nightmare! This was also in fact a year before Tim Berners-Lee released the source code for the world’s first web browser on 30th April 1993. IBM had set to work on a device they had hoped would change our business and social lives forever and for the better, the Simon Personal Communicator, however the device which was not just leaps and bounds ahead of its time and competitors, as there were no competitors, it was sadly limited by service provider and initially its price. There were at the time of launch in August 1994 just 15 networks in the US able to provide the right frequencies, and due to it’s astronomic launch price of $899, that’s approximately $1,600 in today’s money upon its launch, it was not a device everyone could afford or would choose to fork out that amount for on new unknown technology, subsequently IBM only sold 50,000 units in the first and only 6 months of its availability, and even after dropping the price to $499 about 4 months later in a last minute attempt to drive sales, they were forced to ditch the project and discontinued the device as no other networks were willing to work with them in adapting their networks and adopting the device. In February 1995 the IBM Simon was shelved. 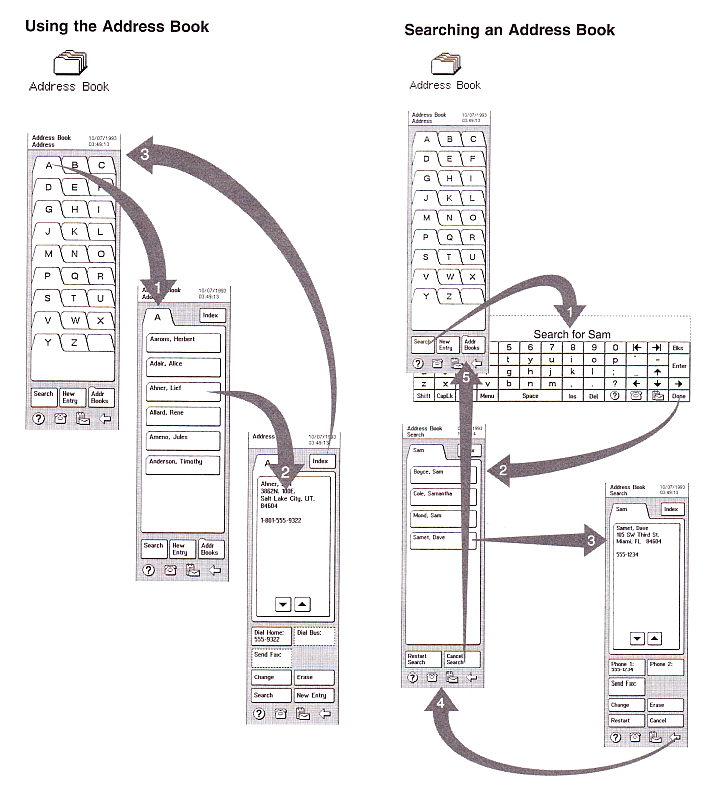 So, I hear you cry what was so great about the IBM Simon anyway, well even though back in 1992 when the device was first created, to it being exhibited in 1993 to being launched in 1994 there wasn’t the internet in the form as we now know it, and mobile internet was still a thing of science fiction, or was it? Well quite possibly not, though never mentioned and always overlooked IBM had in essence not just created the world’s first smartphone, they had devised a means of transferring and receiving packet data through the internet via a radio and digital frequency, basically creating mobile internet before the creation of mobile internet as we know it. The device was able to send, store and receive packet data in the form of fax, email and pager, and you know I said that it was limited to just 15 network providers, well it had a means of plugging into a landline when out of area to make and receive calls at a reduced landline rate.

Looking at the display layout we can see that many of today’s smartphones use many of the same design cue’s, for instance a homepage, application page and back button, quite possibly taken directly from the Simon.

Among the things already mentioned the device boasted a calendar, an address book, a scheduler, calculator, world time, drawing-pad, and notepad, as well as a handful of different games to choose from, again making it another first in mobile phone technology just beating the Hagenuk MT-2000 which was the first phone to have Tetris. The device could also be connected to a computer to transfer data and with the intention to install new applications once they were developed.

And the best bit about it was never having to worry about getting hacked or a virus as this was long before hackers and viruses existed, which brings me nicely into internet security, just in case you were not aware we (TLP Technology) provide all the internet device security that you need:

Anyway back to the story!

To use the device was no different from today’s smartphones and tablets, you simply select the app by either touch or by use of a stylus that came with the device, yet another first… once you had selected your app you select what you want from the many different options, type via either a touch keyboard, free hand with annotations or via predictive text with use of the stylus, and the screen was rotatable, in 1994!!! How cool is that!

The IBM Simon was the ultimate portable mobile device that was years ahead of its time, and years ahead of the required network technology it so desperately needed, which sadly led to its sudden demise.

I always wondered what mobile devices we would now be using had the IBM Simon been the success story so many of us wish it had been.